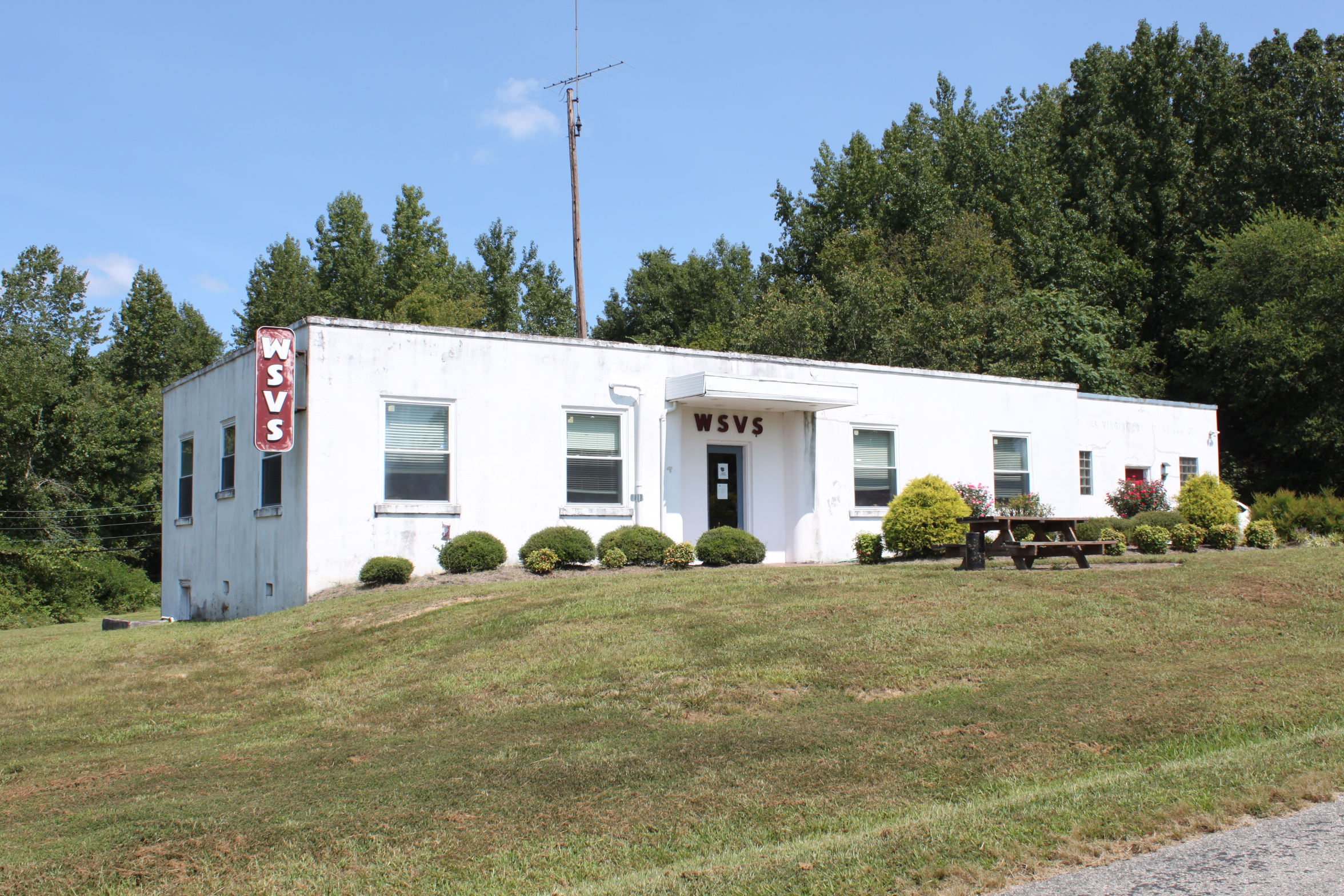 Virginia’s Modern architecture encompasses numerous types of properties, including houses, corporate offices, grocery stores, government buildings, and even radio stations. One of the most recent Register listings for a Modern building is the WSVS Radio Station in Nottoway County. The station’s original transmitter building dates to 1947, which hit the airwaves on April 6. In 1953, the station expanded to its present form with an International Style addition that includes classic, albeit downsized, features of 1950s Modern design. The building has a low-slung form with a rectangular footprint, flat roof, and symmetrical placement of window and door openings. Flourishes include the cantilevered canopy above the main entry, the historic “W S V S” letter signage above the door, and the historic WSVS sign attached to the building’s corner. Still in use today with upgraded equipment, the station’s 1949 transmitter tower is a remarkable survivor in an industry where technological innovations often have resulted in successive losses of materials that were associated with radio’s history.

Although a modestly sized facility, WSVS operated at the forefront of radio broadcasting for promoting bluegrass music and performing artists from Virginia. Longtime disc jockey Jody Rainwater, himself a bass player, played a leading role in programming at WSVS, including live performances in the station’s broadcast booth. He was inducted into the Virginia Folk Music Association’s Hall of Fame in 2000 and was honored by the International Bluegrass Music Association with a Distinguished Achievement Award in 2009. A performance studio in the 1953 building provided space for traveling artists to perform and promote their music. This allowed musical acts to play live for the entire WSVS audience. In a time when rural residents had few opportunities to see live performers and television was not yet a fixture in everyone’s home, the live music played on WSVS provided a much-needed window to the larger world.

Not only that, WSVS played a role in the Cold War of the mid-to-late-20th century. As the U.S. and Soviet Union warily eyed one another, the U.S. government worked to prepare for the disastrous consequences of a hot war. During the 1960s, WSVS participated in civil defense efforts as a member of the Emergency Broadcast System established by the federal government. President John F. Kennedy’s administration created the National Fallout Shelter Survey and Marking Program, which sought to designate public buildings for civilian use in the event of a nuclear strike. A fallout shelter was constructed at WSVS in 1965 to house personnel and equipment necessary for the station to continue making emergency broadcasts in the event of war. Today, much of the historic generator and Raytheon transmission equipment still remain in the fallout shelter and transmitter buildings.

WSVS managers assured that the station served its listeners in other ways, too. In 1950, the station began broadcasting a series on mental health and family life in cooperation with the Commonwealth of Virginia Department of Mental Hygiene and Hospitals and the local Junior Chamber of Commerce. As the station’s signal strength increased, WSVS reached a quickly growing audience that, by the early 1960s, had reached over 200,000 people. In 1955, the radio station received an award for public service in journalism from the Virginia Association of Press Broadcasters due to their coverage of Hurricanes Connie, Diane, and Hazel. WSVS also gained recognition for its eight-week newscast by Don Greene, then Station News Director, who read a portion of the Yalta Papers each day from March 21-May 13 in 1955. According to a broadcasting newsletter printed on May 23rd of that year, Greene received mail from listeners in 31 states, applauding his effort.

Since the late 1990s, radio has competed with an ever-widening range of entertainment options as online radio stations and music-sharing websites proliferated, along with music apps, social media platforms, television, and movie streaming services. Today, more than a century has passed since the first commercial radio station went on the air. Stations like WSVS have demonstrated nimble adaptations to changing technology and an ability to provide essential public services still unsurpassed by other methods, all while bringing music of all types to their audiences.