For example, currently in the archaeological record, the iconic symbol of the 1650s Chesapeake region is “the Quadruped,” a four-legged creature commonly called “the Running Deer,” which was impressed or engraved on tobacco pipes. In the scientific samples (archaeological collections), there are no examples of Running Deer before 1620. This reveals forgotten facts about our past. Exactly what, is unknown — and it will have to be teased out, piece by piece, over the coming decades. But a century ago, we did not know the Quadruped existed, much less that it was a familiar symbol of the 1650s Chesapeake.

In the winter of 2016 Roger Buyrn, whose house stands on land patented in 1637 by John Howe, decided it was time to take down an old tree that had slowly died on his lawn. He cut it down and then brought in his backhoe to pull the stump. Under the tree, the first artifact he discovered led to another, and another—with each creating more questions about the property, Eyreville, located along the Chesapeake Bay in Northampton County.

The Buyrns took their questions to DHR. They wanted to know more. Lone artifacts are curios; real research value comes from finding them undisturbed in their original soil “context,” where they can be collected as scientific samples. The Buyrns offered DHR archaeologists the chance to study their property, beginning with that tree. Those excavations, which are ongoing, have already yielded surprising information. Although Roger and his family have been tending to Eyreville’s lawn for decades, they had no idea that just inches below the surface archaeological evidence pointed to the beginnings of the European settlement and trade that led to our present-day United States.

The finds from the uprooted tree at Eyreville led DHR to sponsor—in partnership with the Archeological Society of Virginia and the US Forest Service’s Passport in Time program—several field schools, and additional investigations at the site. “Digging” as a process involves not just excavating pits in the ground but also exploring historical records. Those records revealed that when John Howe patented the present-day Eyreville property in 1637, it was likely already his home. He was living on the Eastern Shore by 1623, and represented Northampton County in the House of Burgesses at Jamestown. Therefore, it is evident that sometime between 1623 and 1637 he built a house at the site, meaning Eyreville may be the oldest colonial site yet excavated on the Delmarva Peninsula.

Two subsequent owners occupied the property before the end of the 17th century. The second was only a resident for a short period, but his brother, Obedience Robbins, was a prominent local citizen. Documents hint that he may have had Dutch settlers living there for much of the 1640s and early 1650s. The third owner came to Virginia as an indentured servant, and after earning his freedom, Colonel William Kendall became a wealthy trader who served as the Speaker of the House of Burgesses at Jamestown in the 1660s.

Documents indicate Kendall built a new house at the site in 1682, just four years before his death, and he may have built an earlier house soon after purchasing the property in 1657. His descendants held the property until 1799, when they sold it to the Eyre family. The Eyres built a new house, and it still stands. Bearing in mind Maryland was settled in 1634, this site has been continuously occupied since Howe built his house before 1637, which is why we think Eyreville may be the oldest excavated Delmarva site.

The earliest colonial houses stood on wooden posts, set into the ground. Archaeologically we have discovered remains of one, and possibly two, post-in-ground structures related to the Howe years. We have also uncovered two larger brick structures that likely represent the houses built by Kendall. In 2019 we also discovered a well with the help of Jamestown Rediscovery’s ground penetrating radar and subsequent excavations. Several other hints at structures and other features have been observed in our excavations, and in the future we hope to be able to better understand Eyreville’s 17th-century landscape and its evolution.

Thousands of artifacts from colonial Virginia’s first century have been recovered at Eyreville, including blue-and-gray stoneware from the Rhine River valley, and sgraffito slipware from North Devonshire, England. Our focus here is on the tobacco pipes because they carry a great deal of information about the site and the region.

Tobacco pipes are an American Indian invention over 3,000 years old, but tobacco did not reach Europe until Columbus’s return, in 1493. The Spanish occupied areas where Natives tended to smoke a form of cigar, while the English colonized where First Peoples usually smoked pipes. During the Roanoke Island voyages of the 1580s, enough tobacco went back to England to create addicts there and a need for pipes. Work by David Givens indicates the familiar white clay pipes of England were probably copies of 1580s Siouan pipes made in the Roanoke River valley. Back in England, constant cross-Channel traffic carried pipe making to the Netherlands by 1600. The English and Dutch made the same generally rounded “belly” bowls, and a significant number of Eyreville pipes bear the marks of Dutch makers.

In the new industry, Europeans made their rounded belly bowls with hard-firing “white ball clay.” Native American clays usually fired pale brown, reddish brown, or dark gray. While rounded Siouan bowls apparently inspired European pipes, in the Chesapeake region the English took Algonquian lands, where typical pipes were elongated-cone “elbows.” Mid-Atlantic Algonquians also embellished their bowls with stamped decoration, which is much less common on Siouan or Iroquoian pipes. Native American clay pipes became a diagnostic artifact; essentially all Chesapeake sites occupied between 1607 and circa 1680 will have them.

The clay tobacco pipes discussed here are all related to Eyreville’s post-in-ground structures. As noted, Howe likely built these in the 1630s, and they were probably abandoned around the time Kendall purchased the property in the late 1650s. (That coincides with what we know about the typical lifespan of post structures.) We have not excavated very deeply in this area, removing only approximately 10 centimeters of soil from the surface to expose cultural features. Many of the pipes recovered seem to date to the later second and third quarter of the 17th century, and likely represent the backfilling of an abandoned building. Clusters of pipe fragments have been found, and might represent dumping episodes after cleaning the hearth in the newer structure.

(This blog continues after the images and captions below.) 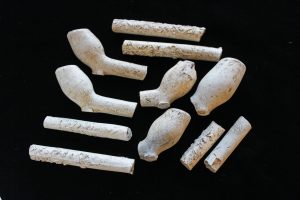 These represent the white ball clay pipes recovered from Eyreville. They include bowls that are typical of the 2nd and 3rd quarter of the 17th century. They are slightly larger than the previous pipes of the 1620s but still have a “belly,” or bulge, in the middle. The pipes manufactured in both the Netherlands and England shared the same type of bowl evolution over the decades. The English stems, however, were typically plain and featured no decoration or defining marks. Dutch pipe stems often were highly decorative and included fleur-de-lis and other floral decorations as seen on these. Some pipes also had maker’s marks on the foot of the bowl. Note the bowl in the center right has an “EB” mark. We have recovered four bowls with this mark, signifying they are from Edward Bird’s shop in Amsterdam. Bird was one of the most prolific and successful pipe makers of the era. He was a Puritan who moved to Amsterdam from England when he was young and made a fortune in the pipe business. His mark is one of the most common found at colonial sites of the period. We have a large collection of white pipes and fragments at this point in our project, numbering well over 1,000.

Pipes are usually stamped with geometric motifs whose names and meanings are now vanished with their world of 375 years ago. Occasionally creatures appear—but remain both familiar and mysterious. With few exceptions, they move nose to tail in pairs: running deer, swimming fish, or flying birds (like these), chasing each other around the bowl. The forked tails identify them as swallows or swallow-tailed kites, a raptor with a four-foot wingspan which no longer nests in Virginia. Both species migrate, sometimes forming large flocks, and they are generally welcomed in many cultures as heralds of warm weather.

If pipe decoration includes creatures, these are usually the enigmatic “quadrupeds.” Commonly called “Running Deer,” scholars question their actual species, with theories including antelope and dogs. The motif is rigidly replicated, with peaked ears but no antlers, while tails stand erect, like an alert whitetail deer. Exceptions exist—out of more than 100 bowls, there are three pipes with tails down, two of which have the only known antlers. Legs are usually a single straight line, and these jointed legs are also an exception—perhaps 20 of these bowls are known. These three may have been made at Eyreville, which has more deer with “knees” than all other sites in the Chesapeake, total. Running Deer pipes are found to date between about 1630 and 1680, and were probably made by Algonquians to trade with colonists. Although produced by multiple tribes in Maryland and Virginia, every Running Deer is essentially the same – this is an iconic symbol of Mid-Atlantic Algonquian culture. Perhaps they relate to the season when deer have no antlers, at the end of winter. But it seems most likely they are two frolicking does—like the Three Graces of Greek mythology—symbolizing all that is good in life.

Pipe designs probably represent specific objects, expressed abstractly. Elongated triangles may symbolize swallow-tailed birds. Other elongated triangles tilt, probably representing leaves such as long blades of corn. This pipe could be showing a pine sapling or similar flora, but these are more likely the tassels of corn. Debra Haaland of the Laguna Pueblo, the current U.S. Secretary of the Interior, sometimes wears a corn plant topped with similar tassels, see photo.

Horizontal bands with diagonal infill were a favored motif on 17th-century Mid-Atlantic Algonquian bowls. The circa 1650 American pipes from Eyreville frequently bear this pattern, stamped on classic Algonquian “elbow” pipes. Elbow pipes have been used for about 2,000 years, although they underwent changes after the arrival of European settlers—like tobacco itself. Colonists transformed the herb from “the sacred to the profane,” and making it an economic engine of colonialism. The signs of pipe making—multiple identically-decorated bowls—hint that the Eyreville settlers lived very near, or even alongside Algonquian neighbors.

Algonquian-style pipes could have been predicted at Eyreville—but two findings could not. First, although colonists began making pipes about 1640, these have not been identified at Eyreville; all appear to be Algonquian. Second, the pipes were almost certainly made near, or at Eyreville. There are multiple bowls which appear to have been made by the same hands, and the 1,878 pipe fragments are 44 percent of American origin. It’s entirely possible the pipes were made inside the colonial compound. There is evidence this happened across the Bay, at a Westmoreland County site (44WM12).

Meant to be smoked, broken, and thrown away, these small implements were forgotten with the garbage almost four centuries ago. Records mention the Dutch in Virginia. The pipes of Eyreville give physical proof of Netherlanders trading with the isolated tobacco plantation on the far Eastern Shore. Bloody warfare after 1607 drove American Indians from their lands on the James River. But these pipes show that by mid-17th century, Algonquians were living close by, and possibly even with the colonists at Eyreville. Conflict continued, but Virginia’s First Peoples were able to pull back to the treelines—and endure. Records give us an outline of our past, but archaeology fills in forgotten details.

Read a prior blog about archaeology at Eyreville

Read other blogs about archaeology in Virginia