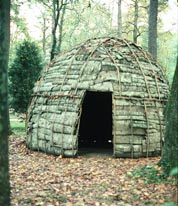 The Woodland period refers to the more sedentary cultures that lived in the extensive woodlands of what is now the eastern United States. A major innovation occurred about 1200 B.C. when the people began making fired clay cooking and storage vessels. Archaeologists believe this technology was introduced to Virginia from the people along the coast of present-day Georgia and South Carolina. There, the earliest pottery in North America may have been made as early as 2500 B.C. The shape and size of the first pottery in Virginia was patterned after that of soapstone vessels. Clay pots quickly proved to be more versatile and practical than soapstone.

Though pottery vessels were fragile and easily broken, they could quickly be replaced. Superior cooking pots, they also provided drier storage than earlier fiber or skin vessels. Archaeologists have recorded the changes over time in the size, shape, temper, surface treatment, and decoration of pottery from 1200 B.C. to the present. This wealth of pottery information provides archaeologists with ways to help date sites and to define Indian groups and interpret their interaction and movement. 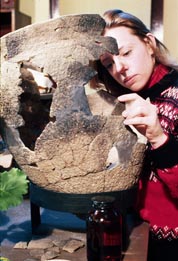 Although people undoubtedly lived in various shelters throughout their sojourn in Virginia, the first evidence for house patterns occurred in the archaeological record in the Early Woodland period. These homes were round to oval and from 10 to 20 feet in diameter and from 16 to 28 feet in length. Storage pits were located along the inner wall of the houses and fire pits were in the center. Since the small, but numerous, wall support posts were driven 1 to 2 feet into the ground, the houses probably supported a great weight of thatch or bark covering and storage of belongings in the rafters. This suggests permanently-built homes, reflective of a sedentary life style.