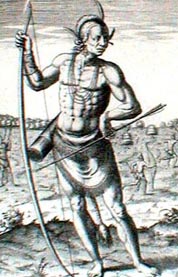 Click image to enlarge. Men shaved the right side of their heads for precision shooting with bow and arrow. Hair on the left side was often tied and adorned with feathers or tails of animals.  Elaborate body painting was for decoration.  The necklace and bracelets were of pearls or copper beads.

When Christopher Columbus landed on the shores of the Western Hemisphere, or, more precisely, the West Indies, he believed he had found a new trade route to Asia. Thinking he had landed in India, he called the native people “Indians.” The coastal groups in Virginia first encountered European explorers in the 1520s. During this early period, the natives likely traded with the Europeans to give them fresh water, fruit, and meat.

The first English colonists arrived in North America in 1584 at Roanoke Island, in what is now North Carolina. The next year, a group of these settlers explored southeastern Virginia. The Roanoke colony found it difficult to survive and ran out of food and supplies. In 1590, when the colony’s leader, John White, returned from England, he found the settlement deserted. What happened to the “lost colony” remains a mystery to this day.

The first English colony in North America that managed to survive began at Jamestown in 1607. Although this settlement also ran out of supplies and nearly perished, it grew as increasing numbers of colonists arrived.

Led by Captain John Smith, the settlers immediately explored the surrounding country, traveling up the James, York, Rappahannock, and Potomac Rivers as far as the fall line. They observed and wrote about the many villages and natives they met. Smith published an accurate map of the Coastal Plain of Virginia, marking the villages the scouting party discovered. Smith wrote of the Indians, “The men bestowe their times in fishing, hunting, wars and such manlike exercises . . . .The women and children to the rest of the worke. They make mats, baskets, pots, morters, pound their corne, make their bread, prepare their victuals, plant their corn, gather their corn, beare al kind of burdens and such like.” 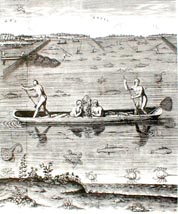 About their dress, he wrote, “[The Powhatans are] generally tall and straight, of a comely proportion, and of a colour browne . . . Their haire is generally black, but few have any beards. The men weare halfe their heads shaven, the other halfe long . . . The [Women’s hair] are cut in many fashions agreeable to their years, but ever some part remaineth long. They are very strong, of an able body and full of agilitie, able to endure to lie in the woods under a tree by the fire, in the worst of winter.

Wahunsunacock was the paramount chief, or “Powhatan,” of the chiefdom when the colonists first arrived. His title and the name of the chiefdom were one and the same. By 1607, many of the villages of the Algonquian-speaking people were brought under one rule by Wahunsunacock and formed the Powhatan paramount chiefdom. Wahunsunacock ruled more than 32 subchiefdoms in more than 150 villages of various sizes, which he controlled through inheritance and power. In war, the districts fought for him; in peace, they paid taxes on their produce. The chief, in return, aided them in times of need. Wahunsunacock died in 1618.

One of Wahunsunacock’s daughters from one of his many wives, the famous Pocahontas, was kidnapped by the colonists. Pocahontas was the first Indian woman to marry an English colonist when she took John Rolfe for her husband in 1614. Rolfe introduced a mild West Indies strain of tobacco to Jamestown, which soon became the settlers’ main crop.

The new settlers brought with them different tools, clothing, lifestyles, and a need for land. During the first decade, encounters between colonists and Indians were often hostile. In 1622, Wahunsunacock’s brother, Opechancanough, launched the first coordinated attack to expel the settlers, leading to a decade of intermittent warfare. The Indians tried a second attack in 1644, but by then they were fewer in number and faced 15,000 colonists.  After Opechancanough’s death in 1646, the Powhatan chiefdom basically ceased to exist. 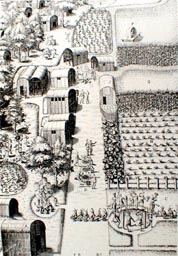 The once mighty Powhatan chiefdom was reduced to a tributary status, being required to make yearly payments to the colonial government as a sign of dependence. They also lost all lands between the York and Blackwater Rivers. In 1677, another treaty was made with the colonists. The Indians along the coast lost their remaining land and were confined to small reservations. Many of the tribes were extinct by 1722. The Rappahannock tribe lost its reservation shortly after 1700; the Chickahominy lost theirs in 1718. These groups and the Nansemond, who sold their reservation in 1792, faded from public view. Only the Pamunkeys, Mattaponis, and an Eastern Shore group kept reservations, although their land constantly shrank in size.

Some native people wanted to keep the traditional lifestyles, while others accepted white culture. Powhatan religion and language, central aspects of the culture, were gradually replaced by Christianity and English. The people still raised crops, hunted, and fished. Cash crops, like cotton, were added, and  livestock, such as chickens, cows, and hogs, became commonplace. Log and plank houses replaced the bark and mat-covered oval houses, and traded iron implements quickly replaced stone tools. However, the native ceramic technology of vessels and pipes remained vibrant, adapting to European shapes and functions.

Two groups distinct from the Powhatans, the Nottoways and Meherrins, lived in the Coastal Plain of Virginia. They spoke dialects of the Iroquoian language and lived along the Nottoway and Meherrin Rivers. Like the coastal Algonquians, the people farmed and hunted, and their houses were similarly interspersed among fields of crops. Unlike members of the Powhatan chiefdom, however, the Nottoways and Meherrins lived as tribes in autonomous villages, with a local chief holding little sway beyond the village.

It appears from court records and related documents that the Indian populations in the Coastal Plain dropped from a height of 20,000 to about 1,800 by 1669 due to warfare and diseases introduced by Europeans. 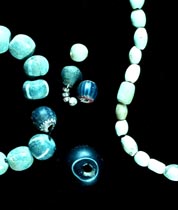 Glass beads of the type traded to the Indians.

Little is known about these people because few early traders and travelers kept records. These sketchy pieces of information from written records survive: Captain John Smith in 1608 met a group of Manahoacs, who lived in at least seven villages to the west, above the falls of the Rappahannock River. The Manahoacs were friends of the Monacans and enemies of the Powhatans.

The first mention about the Monacan tribe also comes from Captain Smith. In 1608, he learned from a Powhatan informant about five Monacan towns west of the James River falls at present-day Richmond. In 1670, German traveler John Lederer was commissioned by the governor of Virginia to explore the territory. Approaching one of the villages along the James, he was welcomed with friendly volleys of firearms.

After leaving Monacan Town, Lederer proceeded to Sapon, a town of the Saponi people located in Charlotte County along the Roanoke River.  Lederer wrote, “This nation is governed by an absolute monarch; the people of a high stature, warlike and rich. I saw great store of pearl unbored in their little temples, or oratories, which they had won amongst other spoyls from the Indians of Florida, and hold in as great esteem as we do.”

Lederer advised traders to carry with them cloth, axes, hoes, knives, and scissors to trade with the Indians. Though the Indians were eager to purchase arms and ammunition, such trade was outlawed by the colonial government. For remote tribes, he wrote, the best articles to carry were small trinkets, copper, toys, beads, and bracelets.

A year after Lederer’s expedition, Robert Fallam and Captain Thomas Batts, under the commission of General Abraham Wood, left the James River near Petersburg and traveled west. The men arrived at Sapon Town, welcomed by the firing of guns and plenty of supplies. Continuing beyond the Piedmont, they met with yet another warm greeting from the Totero people living in either the Roanoke or New River Valleys. The closely allied Saponis and Toteros eventually left their villages and many moved south, joining their friends the Occaneechis.

According to John Lederer’s report, the Occaneechi people lived on an island in the Roanoke River near Clarksville. From 500 miles away, other tribes came to the village to trade, making the island a great regional center.

Probably around 1716, the Saponis, Toteros, and Occaneechis left North Carolina for Fort Christanna in Brunswick County, Virginia, in a move to maintain closer trade relations with colonists. The Indians’ presence there provided a barrier between hostile Tuscaroa in North Carolina and the Virginia settlements. In 1722, a general peace was made between the Iroquois and the Virginia and Carolina Indians. Around 1740, many of the Saponis, Totero, and Occaneechis moved north into Pennsylvania.

In 1833, a group of the central Piedmont Indian groups purchased 400 acres of land on Bear Mountain in Amherst County, where they established a small enclave. Their descendants are known as the Monacans.

Indians in the Mountains

Little is known from the written record of the Indians who lived in the mountains of western Virginia. John Lederer was the first European to view the Shenandoah Valley from the Blue Ridge in 1670 when his party traveled up the headwaters of the Rappahannock River. The Robert Fallam and Thomas Batts expedition of 1671 marked the first contact with the Totero people living in either the Roanoke or New River Valleys. By 1706, when Louis Michel, a French Swiss traveler, proceeded up the Shenandoah River to a point near Edinburg, he noted that “All this country is uninhabited except by some Indians.” The area was presumed devoid of any permanent settlements, with only hunting parties of Shawnees, Susquehannocks, and Iroquois moving through.

Thomas Walker, a physician who became a surveyor for the Royal Land Company, saw no Indians in his 1750 expedition through southwestern Virginia. Twice, however, he came across Indian tracks on the trail. When he reached Long Island in the Holston River at Kingsport, Tennessee, he described an abandoned village that may have been Cherokee: “In the Fork between the Holston’s and the North River, are five Indian Houses built with logs and covered with bark, and there were an abundance of Bones, some whole Pots and Pans, some broken and many pieces of mats and Cloth.”

By the time Europeans came to settle western Virginia, it had become another region void of Indian villages. The only natives sighted were hunting, trading, and raiding groups of Cherokees and Shawnees passing through the region.