.
People used pestles and mortars to crush nuts and seeds to prepare foods that could more easily be digested.

By the Middle Archaic period, the Indians of Virginia had adjusted well to the Eastern woodland. They became masters of the deciduous forest of oak, hickory, and chestnut. Their knowledge of how best to use the physical setting altered with the changing environment and shifting seasons of the year, and gradually became more sophisticated.

.
Hunters using the atlal, or spear thrower, could increase the force and distance of their spear throwing to bring game down from further away.

For example, based on the findings of beautifully shaped and polished perforated stones, scientists in Virginia now have evidence of the spear thrower, or “atlatl.”. Evidence for this weapon was found in the Early Archaic period in Florida, where wooden shafts of the tool were preserved.

Other tools that archaeologists commonly find in gathering societies are mortars and pestles. These tools were used to crush nuts, seeds, and fibrous plants in preparing foods. People added walnuts to the list of seed crops harvested.

Notched stones found at archaeological sites are interpreted as net sinkers. They indicate that the people expanded their quest for food by catching large numbers of fish in nets. 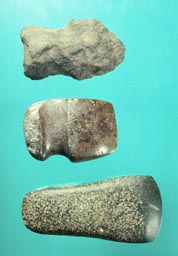 The people of the Eastern forest started to produce in large quantities chipped stone axes around 4000 B.C. The axes were made from tough, resilient stone such as basalt and quartzite. With large axes, the Middle Archaic people could more easily cut wood to build houses and make fires. The resulting forest clearings altered the environment in a radical way. Clearings encouraged the growth of plants and trees that were beneficial to the people, such as berry bushes and fruit and nut trees. Deer, bear, turkey, and other animals came to the clearing to browse on the tender leaves of low-lying shrubs and to eat berries and nuts. The people had made changes to the environment, that brought them direct benefits

By then, numerous types of spear points were used throughout the eastern United States. Many of them are found in Virginia. Archaeologists use point styles from a particular time to determine the period in which people lived at a site.