The celt enabled people to become more efficient at woodworking.

Populations grew in Virginia so that diverse tribes now lived in scattered, settled hamlets along major rivers that wound through the mountain valleys and down through the Piedmont and the Coastal Plain.

One example of the great diversity can be found in the Stone Mound Burial culture in the northern Shenandoah Valley. This culture, dating from 400 B.C. to A.D. 200, placed hundreds of low stone mounds in clusters on ancient bluff-like river terraces overlooking the floodplain. Only a few people were buried with great ceremony in each mound.

Sometimes, the Stone Mound people placed rare and sacred objects made from exotic materials in the graves. These objects included tubular and platform pipes, copper beads, hematite cones, pendants, basalt celts, spear-throwing stones, and caches of projectile points. The people placed the objects within the mound for the deceased to use on their afterlife journeys. The few graves within each mound, the few clusters of mounds, and the special objects suggest that the Stone Mound Burial culture gave only higher-ranking people this preferential treatment.

During the Middle Woodland period, the people slowly replaced their spears with the bow and arrow as a hunting weapon. Evidence for this change is found in smaller projectile points, particularly the triangular shapes. Further advances came as people redesigned the grooved axe and used what is called a celt, or ungrooved axe. Sleek and polished the celt enabled people to refine their woodworking techniques.

Starting in the Middle Woodland and continuing into the Historic Period, people lavished their artistic ability on their tobacco pipes. Tobacco pipes in the Early Woodland Period resembled large, straight cigars. Later pipes were fashioned into exquisite effigy carvings of birds and animals. Most of the Late Woodland pipes were a short-stemmed elbow type into which wood or reed stems were inserted.

Tobacco, introduced during the Late Woodland Period and considered a gift from the gods, was reserved for reverent use in medicinal and spiritual supplications. In later times, particularly after contact with the Europeans, smoking for pleasure developed among the Indians, and pipes became commonplace. 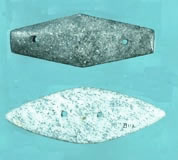 Two-hole stone pendants worn around the neck were used for decoration and perhaps as badges of rank.

A number of developments point to the beginning of ranked cultures. As the Middle Woodland people created specialized items and increased their trade, status was bestowed on individuals within a tribe. Differential status led to a more complex, ranked social structure.