Most scientists think that the first people entered the Western Hemisphere from Asia over land that connected Siberia and Alaska at the end of the last great Ice (or Pleistocene) Age. Huge glaciers more than a mile thick covered large areas of land in what is now Canada. The glaciers lowered the sea level by 300 feet, exposing an immense, 1,000-mile-wide plain between Siberia and Alaska known as Beringia. Especially along the coast, the tundra-like plain teemed with animal and plant life, and the ocean provided abundant marine life. The early immigrants were unaware they entered a new continent as they hunted Beringia’s game and gathered plants for food.

When did the first people arrive and what was their culture like?

While Native Americans believe that they have always been here, the first documented Paleoindian culture was found at an archaeological site near Folsom, New Mexico, in 1927. There, a distinctive spear point was found between the ribs of a type of bison that had been extinct since the end of the last Ice Age. Five years later near Clovis, New Mexico, a woolly mammoth kill and associated stone tools were uncovered, dating to 11,200 years ago. The hallmark of the Clovis culture is the lance-shaped fluted point. Although Clovis points are found across the continent, an especially large number of them are found in Virginia. Other stone tools found with the Clovis point include scrapers, gravers, perforators, wedges, and  knives. Evidence uncovered so far in Virginia suggests that these tools were used to spear game, cut up meat, scrape and cut hides, and split and carve bone of deer, bison, and rabbit. Caribou, elk, moose, and possibly mastodon also may have been hunted. The effects of the glaciers made for long, hard winters and short, cool summers. In the Appalachian region, the mountain slopes were bare and tundra-like. People in the Shenandoah Valley and northern Virginia lived among grasslands, open forests of conifers, such as pine, fir, spruce, and hemlock, and occasional islands of deciduous trees. Slightly warmer weather south of present-day Richmond encouraged the growth of more deciduous trees such as birch, beech, and oak.

The first people lived in groups which anthropologists today call bands, and camped along streams that flowed through the tundra-like grasslands and the open spruce, pine, and fir forests that covered Virginia at that time. A band was like an extended family. Due to the harsh climate, each band moved seasonally within a set territory to hunt and forage. 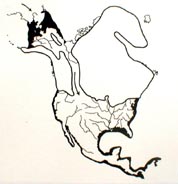 Scientists are not in agreement as to when people entered the Western Hemisphere. Some findings being discussed among archaeologists are the pre-Clovis dates and tools from a site named Cactus Hill in southern Virginia. Here a small band of people lived on top of a sandy hill overlooking the Nottoway River. One piece of white pine was radiocarbon dated to almost 17,000 years ago. Associated with the pine were stone tools and the raw material from which the tools were made. These findings are challenging prevailing theories regarding human settlement of North America.

If people lived in Virginia 17,000 years ago, then scientists will need to review how people entered the Western Hemisphere. The accepted theory, as presented earlier, held that humans entered Alaska from Asia walking across Beringia and migrated south to the Great Plains, passing through an “ice-free” corridor between the huge Cordilleran and Laurentide glaciers. People could not have walked down the Pacific coastline of Canada because many glaciers flowing down from the mountains into the water would have blocked their path. But the ice-free corridor between the two glaciers opened later than Cactus Hill, between 14,500 and 13,000 years ago.

With an interior route blocked with ice, archaeologists are looking once again to the coast for an alternative path south. Archaeologists now speculate that a culture, using boats, and hunting marine and land mammals, moved along the coast of Beringia, down the coast of Canada, the United States, and Central America into South America. Descendents of the people then migrated into the heartland of North and South America, eventually ending up in the area now known as Virginia.

A few archaeologists have turned to Europe and Australia for another hypothesis. They suggest that people living on the Iberian Peninsula (present-day Spain and Portugal) or Australia took to boats and traveled to the Western Hemisphere by passing along the edge of ice sheets in the north Atlantic and south Pacific oceans. These people, also, would have been adapted to fishing and hunting sea mammals.