DHR Announces Publication of “The Archaeology of Virginia’s First Peoples” 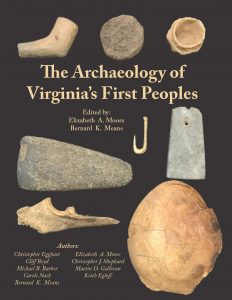 —Partially funded by DHR, the book is a joint publication of the
Archeological Society of Virginia and the Council of Virginia Archaeologists—

—Focused on Virginia’s pre-European Contact past, the multi-author volume is for scholars and readers interested in Virginia’s American Indian archaeology—

With partial funding from the Department of Historic Resources, the Archeological Society of Virginia (ASV) and the Council of Virginia Archaeologists (COVA) recently completed a yearslong effort to produce The Archaeology of Virginia’s First Peoples, a book about Virginia’s pre-European Contact past.

Edited by Elizabeth Moore, DHR’s state archaeologist, and Bernard K. Means, a professor of anthropology at Virginia Commonwealth University, The Archaeology of Virginia’s First Peoples surveys a timespan that stretches back more than 15,000 years, as evidenced by the Cactus Hill Archaeological Site in Sussex County and numerous other sites throughout Virginia.

Featuring more than 100 photos, maps, tables, and illustrations, The Archaeology of Virginia’s First Peoples costs $40 and may be purchased through Amazon (www.amazon.com). The organizations will use proceeds from sales of the book to fund future publishing projects.

The editors and six other contributing archaeologists to the volume range chronologically across the major temporal-cultural divisions that scholars use to discuss American Indians in Virginia and the extended Mid-Atlantic region during the pre-Contact past. The authors enlist the findings of recent archaeology, new technologies, and evolving research to discuss—and question—current ideas about Virginia’s First Peoples during the Paleoindian through the Early Archaic, Archaic, and Early and Late Woodland periods.

The eleven chapters of The Archaeology of Virginia’s First Peoples cohere as follows:

Archaeologists and historians know more about the Late Woodland period of eastern Virginia’s native people, according to Moore and Means, because that is where and when American Indians and Europeans had their first and most sustained contact before native societies were disrupted—“but not eradicated or vanquished,” the editors are quick to observe.

Today, Virginia has reservations that date to the state’s colonial era, well before the formation of the United States. Last year the federal government officially recognized six of Virginia’s American Indian tribes: the Chickahominy, the Eastern Chickahominy, the Upper Mattaponi, the Rappahannock, the Monacan and the Nansemond tribes. In 2015, the Pamunkey Indians became the first tribe in Virginia so recognized, and currently the Mattaponi tribe is working to secure federal recognition as well.

“The Archaeology of Virginia’s First Peoples is a significant and long-awaited achievement,” said DHR director Julie V. Langan. “DHR is delighted to have provided funding that helped bring it to publication and that it can further research about, and increase awareness and understanding of Virginia’s Indian communities, past and present, an integral part of the agency’s broad mission,” Langan said.

“This book,” said state archaeologist Moore, “and its 2017 companion volume, provide a valuable overview of our knowledge of archaeological resources in the state and their potential for leading to a greater understanding of the past. This synthesis pulls together recent research that allow us not only to identify areas where we have significant data, but also to identify those areas that need additional research.”

“These two volumes emerged from the shared mission of COVA, ASV, and DHR to present current research about thousands of years of Virginia’s buried past, and also to encourage new scholarship and insights on Virginia’s archaeological sites and collections,” said Eleanor Breen, an archaeologist for the City of Alexandria and the current president of COVA.

“The ASV is proud to join with DHR and COVA in such an impressive publication about Virginia’s First Peoples,” said book contributor Barber, ASV’s incoming president. “Although a long time in arriving, the volume does much to enhance our understanding of the long and proud history of friends and neighbors.”

About ASV:
With affiliated chapters located around Virginia, the Archeological Society of Virginia promotes the study of archeology and anthropology; fosters proper conservation and exploration and scientific study of archeological sites and materials; disseminates archeological knowledge through media publications, meetings, lectures, and exhibits; and collaborates with individuals, organizations, and agencies that serve the same purposes as the ASV.