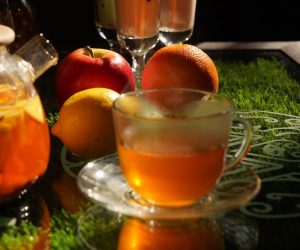 Cold days call for hot, historic drinks. At least that’s what our intrepid researcher Matt Gottlieb told us after he came across a 1908 (or earlier) rum punch recipe from the Virginia Club, a fraternal society established by the City of Norfolk’s leading gentry on June 26, 1873. We found the information interesting, but, upon looking at the actual recipe, we told Matt that we had no need for a drink containing five quarts of hot hooch. Chastened, he came back with his interpretation for a single serving. The skill level is moderate. If interested, allow yourself a little over an hour for preparation, though only about 5 to 10 minutes is required for creating the drink.

You will need a lemon, sugar, brandy, rum, water, and ideally some nutmeg.

Step 1: Take a vegetable peeler and create a strip of zest from one-quarter of a lemon. Do not include the white pith. Place the strip in a small bowl. Then take 0.75 ounces of sugar and place it atop the zest. Smoosh—this is a technical term—the sugar lightly into the lemon peel. Let things sit for about an hour as the sugar extracts the oil from the zest. You are creating an oleo-saccharum, an ingredient that has been used to enhance the flavor of lemon or orange punches since at least 1707.

Step 2: Approaching an hour, set a small saucepan of water to a boil.

Step 4: Remove the lemon zest strip, making sure to keep the sugar that’s attached to it. Add the sugar to the mug.

Step 5: Add 2.5 ounces of boiling water to the mug and stir vigorously to dissolve the sugar. Taste. Add more water if desired.

Step 6: If you have whole nutmegs, grate a little atop the drink.

Enjoy! Punch has a long history in Virginia. Many of you know that Thomas Jefferson was born at Shadwell plantation. His father, Peter, purchased the home site with a large bowl of punch.

A word about Hugo Osterhaus, the person who contributed the punch recipe to the cookbook: He rose to rear admiral and commanded the Atlantic Fleet. He died in 1927 and is buried at Arlington National Cemetery.