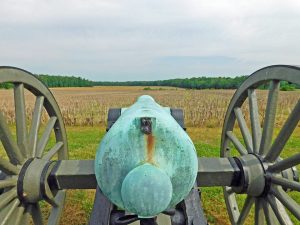 The grants can be applied to protecting acreage affiliated with battles during the Revolutionary War, the War of 1812, and the Civil War by either fee simple land purchases or protective easement purchases. DHR urges qualified organizations to apply for the grants. The deadline for applications is close of business on August 10.

DHR awards the grants on a competitive basis, and the agency typically receives applications for more grant monies than funding allows. DHR disperses the awards through an evaluation process that examines each battlefield’s significance as determined by two reports Congress commissioned, the “Report on the Nation’s Civil War Battlefields,” as amended, and the “Report to Congress on the Historic Preservation of Revolutionary War and War of 1812 Sites in the United States,” as amended.

The grant application and a VBPF grant program manual are available for downloading. For more information, applicants should contact DHR’s David Edwards at (540) 868-7030.