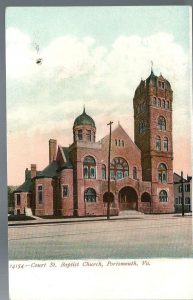 —Congregation traces to 1789, making it the oldest Baptist church in Portsmouth and Norfolk;
the current church sanctuary was completed in 1903—

—The marker text is reproduced below—

RICHMOND – A state historical marker issued by the Virginia Department of Historic Resources (DHR) will be dedicated this weekend that highlights the founding and history of Court Street Baptist Church in Portsmouth, which traces back to 1789.

The dedication and unveiling ceremony for the marker will be this Sunday, November 10, beginning at 11 a.m., inside the church, located at 447 Court Street in Portsmouth. The event is open to the public.

Speakers during the ceremony will include Dr. Nathan Taylor, executive director of the Virginia Baptist Historical Society; Dr. Wilbur Kersey, pastor of Court Street Baptist Church; Joe McDonald, chairman of the church’s board of deacons; and Dr. Colita N. Fairfax, chairman of the Virginia Board of Historic Resources, which is authorized to designate new historical markers.

The Kehukee Association, composed of Baptist churches in southeastern Virginia and eastern North Carolina, established Court Street Baptist Church on September 7, 1789, according to the historical marker. In 1799 church members acquired land and constructed their first sanctuary.

The present Romanesque Revival sanctuary was completed in 1903 and was designed by Reuben H. Hunt, one of the South’s most prominent architects of the era.

In 1865, African American members in the church withdrew and formed two new congregations.

The “Court Street Baptist Church” marker was approved for manufacture and installation earlier this year by the Virginia Board of Historic Resources.

As sponsor of the marker, the church covered its manufacturing costs.

Virginia’s historical highway marker program, which began in 1927 with the installation of the first historical markers along U.S. Route 1, is considered the oldest such program in the nation. Currently, there are more than 2,600 official state markers, most maintained by the Virginia Department of Transportation and by local partners in jurisdictions outside of VDOT’s authority.

The Kehukee Association, composed of Baptist churches in southeastern Virginia and eastern North Carolina, established Court Street Baptist Church on 7 Sept. 1789. This is the oldest Baptist church in Portsmouth and Norfolk and became the mother church of several other congregations. Members acquired land here in 1799 and built their first sanctuary. African American members, about a third of the congregation in 1860, withdrew in 1865 and formed two new congregations. Reuben H. Hunt, one of the South’s most prominent architects early in the 20th century, designed the church’s present Romanesque Revival sanctuary, which was completed in 1903.