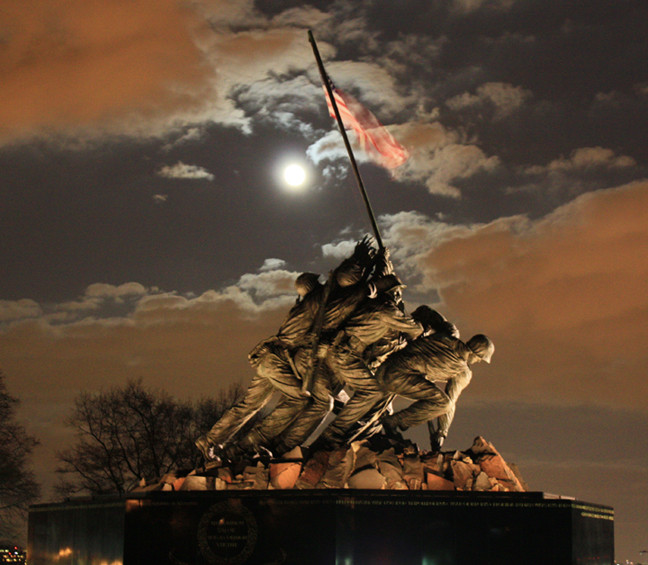 Arlington Ridge Park contributes to the legacy of open space memorials in Washington, D.C. Its most iconic feature is the United States Marine Corps War Memorial, a realistic monumental sculpture based on a famous World War II photograph, shot by Joseph J. Rosenthal, showing Marines carrying out the second flag-raising on Mount Suribachi during the Battle of Iwo Jima in February 1945. The classically composed landscape setting was designed by Horace Whittier Peaslee, Markley Stevenson, and Elbert Peets, well-known landscape architects. Offering a striking counterpoint to the Marine Corp memorial’s monumental realism is the park’s Netherlands Carillon, one of the first examples of modern architecture being used for a commemorative monument in the Capital. The clean, unadorned lines of the steel memorial and its graceful open form contrast sharply with earlier memorials in D.C., and the interconnecting lines and rectangles of the structure’s frame echo the work of Dutch abstract painter Piet Mondrian. The Carillon’s modernist design by Dutch architect Joost W. C. Boks reflects the immediate postwar rejection of classical architecture in Europe, which was associated with fascist regimes. The Carillon, dedicated in 1960, was a gift from the people of the Netherlands to the people of the United States for the liberation of the Netherlands during World War II, as well as for the generous assistance provided by the U.S. via the Marshall Plan following the war. The Carillon is also associated with the Beautification Program initiated in 1964 by First Lady “Lady Bird” Johnson, which sought to embellish and improve the parks, playgrounds, and other public areas of Washington. Arlington Ridge Park, which is administered by the George Washington Memorial Parkway, can be seen from the National Mall’s western terminus, and in that capacity contributes to the mall’s viewshed.