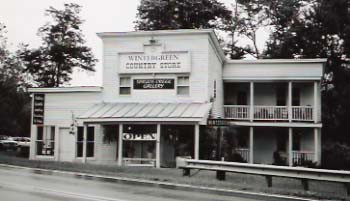 A social, retail, and community hub, the Wintergreen Store in Nelson County was constructed in four phases, beginning circa 1908, when Grover Harris built a one-story, one-room structure with a porch. He added to it in the late 1920s. The store stood at the intersection of state routes 627 and 151—where three previous stores had been built—and conveniently across the road from a mill Harris also owned. The store sold goods and farming supplies, extended credit, and during elections citizens voted there. Mill customers also settled accounts at the store, and in the early 1940s the post office relocated there. From 1974 to 1978, the store building expanded and had a second life housing Wintergreen’s ski resort offices and exhibition and retail spaces, after the ski slopes were established. During its third incarnation, an Episcopal Church mission met there. Currently, the old store serves for an art gallery and apartments.