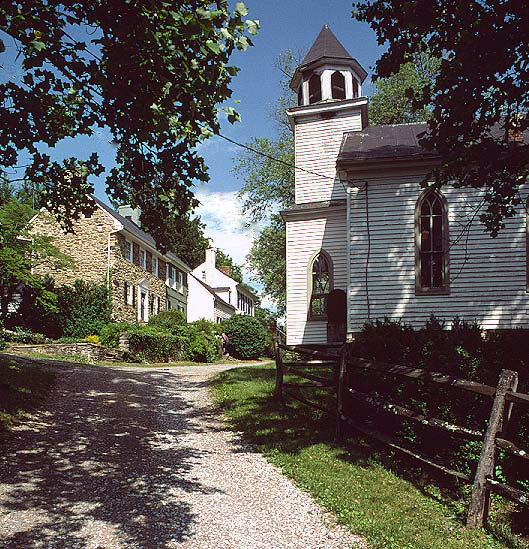 Nestled in the countryside of Loudoun County’s northern tip, Waterford developed as a 19th-century Quaker milling community. The village traces its origins to circa 1733 when Amos Janney and other Friends arrived from Pennsylvania and established a mill complex. By the 1830s, Waterford was a flourishing community of some seventy houses with a tannery, chairmaker, and boot manufacturer, along with shops and a tavern. Commerce declined by the early 20th century, leaving Waterford a remarkably preserved hamlet free of modern intrusions. Its quiet shady streets remain lined with examples of regional vernacular styles, both freestanding and attached, in a variety of materials including brick, stone, and log. A mid-19th-century mill stands at the north edge of town. Aggressive preservation efforts by the Waterford Foundation since the 1940s have maintained the town’s unique character. Since the time of its listing, over sixty properties in the district have been protected through preservation easements.

The Waterford Historic District was listed in the Virginia Landmarks Register and the National Register of Historic Places in 1969 and designated a National Historic Landmark in 1970. In 2015, additional documentation was prepared to provide a brief overview of the historic district’s integrity and to assign a status of “contributing” to a recently identified and researched agricultural resource.
[NRHP Accepted: 12/23/2015]