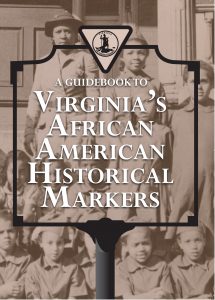 —The book provides locations and texts to more than 300 state historical markers about people, places, and events significant in African American and Virginia history—

The Department of Historic Resources has released a new book that features the texts and locations of more than 300 state historical markers highlighting people, places, and events important to African American and Virginia history, ranging from the colonial era through the civil rights movement.

Compiled by program staff at DHR, A Guidebook to Virginia’s African American Historical Markers sells for $12.95 and is available through local bookstores and online book retailers. It is also available from the University of Virginia Press (www.upress.virginia.edu), the book’s distributor.

Nearly all 309 markers reproduced in the guidebook were erected along Virginia roadsides within the past 40 years, including markers approved in June of 2019 by the Virginia Board of Historic Resources (VBHR), which is authorized to designate new historical markers.

By the early 1990s, DHR and the VBHR steadfastly focused on broadening the sweep and scope of what is the oldest state historical marker program in the nation. The effort resulted in dozens of new markers that address important topics involving the history of African Americans, women, Virginia Indians, and other groups previously under-represented during the program’s 90-plus years of operation.

DHR’s success in diversifying the program is due largely to its receipt of federal highway grants that allowed the agency to create new markers, as well as through the support of sponsoring organizations or individuals who proposed new markers and covered the manufacturing costs of a sponsored marker.

According to the program’s historian and manager, Dr. Jennifer Loux, the guidebook’s 309 markers reveal broad trends in Virginia’s African American history. In the book’s introduction, Loux writes that collectively the markers show that African Americans–

Organized by county and city and consisting of 128 pages and 40 photographs, the book opens with a Foreword by Dr. Colita Nichols Fairfax, a professor at Norfolk State University and chair of the VBHR. In her Foreword, Professor Fairfax speaks directly to the reason why these markers — and those yet to come through future community sponsors — are important:

Generations of Americans of African descent have contributed to the physical and philosophical landscape of Virginia and the United States for 400 years, often at great personal peril, loss, and risk. Therefore, the documentation of the events, sacrifices, and personalities that chronicle this quadricentennial trek is an intrinsic task of any society that seeks to recognize both its triumphant and its painful past.