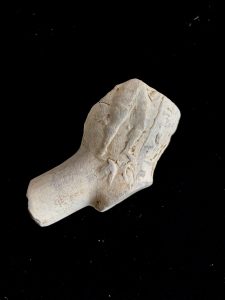 The “Crusader and Huntress” pipe bowl displays a man in period attire holding a pike and a woman with a long flowing gown. Each has a dog by their side. There is some vegetation represented. Very little is known about the origins of the pipe or the meaning of the design. Some people have referred to the woman as Minerva, who was associated with war, which calls into question the name or the idea that she is a huntress.

This pipe was recovered from the same context of a test unit at Eyreville with some 15 other fragments and bowls. It stood out as being highly decorative for a white ball clay bowl but also because it dates to the last quarter of the 17th century, some 20 years later than the other pipes from the same context. It is unclear what this suggests about the deposition of the material culture in this context and further study is necessary to understand this discrepancy. It is possible that this pipe could have origins earlier than previously considered. It may also suggest that the deposits were a fluid process of casual dumping over decades before the context was fully sealed.

Several of these Crusader and Huntress bowls have been found at other sites in the region in Maryland and Virginia. They have also been found in Connecticut and in Maine. As Dr. Lauren McMillan, University of Mary Washington, discusses in her dissertation, these pipes were initially thought to be of Dutch origin, although some scholars have thought they were English and possibly French. McMillan quite astutely dismantles those arguments and agrees that they are likely of Dutch manufacture. Given what we know of the inhabitants of Eyreville and the collections we have recovered, which include a significant number of decorated stems of Dutch origin, we tend to agree. The Navigation Acts of the 1650s seemed to have had some impact on the trade in non-English goods on the Eastern Shore of Virginia, and possibly the wider Chesapeake. Away from Jamestown’s oversight, however, the trade in Dutch pipes seems to have continued for some time, albeit at a reduced quantity.