By the Late Archaic Period, the people in Virginia totaled perhaps in the tens of thousands. Their growing numbers caused them to intensify their hunting and gathering practices. Concentrations of bands settled along the rich floodplain, which some researchers describe as the “supermarket of the prehistoric world.” Archaeologists have uncovered at riverside sites large hearths of fire-cracked rock, proof that the Late Archaic people prepared large amounts of food there.

In the Coastal Plain, the people started to harvest large numbers of saltwater oysters, a custom that would continue to the historic period. Especially in the early spring, before plants came up, oysters were a rich food source. The discarded shells formed thick middens or refuse heaps that archaeologists find to be a rich source of household debris.

In their quest for food and raw materials, the people ventured into every section of Virginia. Soapstone, commonly found along the eastern foothills of the Blue Ridge, was one of the most sought-after materials around 2,000 B.C. Because it was a type of soft rock that carved easily and did not break when heated, it made excellent cooking pots. The people quarried large mushroom-shaped pieces of soapstone from outcroppings, and, with stone and bone tools, hollowed out bowls. When people started making heavy soapstone cooking vessels, they were probably more settled, as the vessels were too heavy to move often. Archaeologists have found fragments of soapstone vessels across Virginia, sometimes hundreds of miles from a quarry. 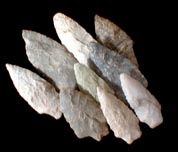 Large knives made from quartzite, quartz, and rhyolite.

By this time, the people were learning to nurture native plant species including sunflowers, gourds, sumpweed/marsh elder, maygrass, lambsquarter/goosefoot, and amaranth. These were plants that appeared in the clearings created by humans with the axe invented in the Middle Archaic period. People in the Eastern United States also started to raise varieties of squash that were brought from what is now Mexico where squash was first developed.

As more and more groups sought the abundant environment along the rivers, they merged through marriage and trade to form small settlements, called hamlets. Each series of hamlets began to take on a simple tribal identity. Elders guided the groups, along with members whose talents made them leaders in specific tasks. This structure was unlike that of earlier bands in which each member held equal standing.