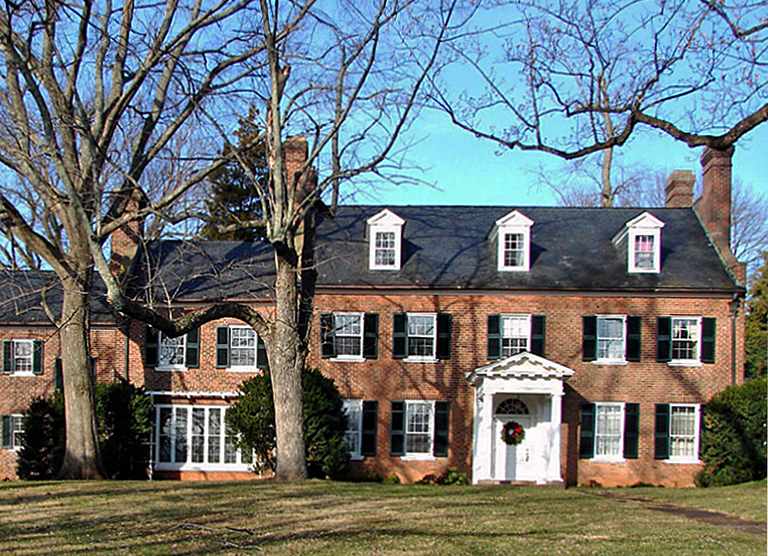 Built around 1855 as a two-story, late-Federal-style dwelling, Hopefield— originally, Brick House Place—was purchased in 1923 by Col. Robert Rollins Wallach, a cavalry veteran of Teddy Roosevelt’s Rough Riders, and by his wife, Feroline Perkins. Wallach hired architect W. H. Irwin Fleming and the local master builder Hanback to convert the dwelling into an asymmetrical Colonial Revival-style house featuring additions to the south side and rear elevations (and a locally unprecedented parapet of interior and exterior end chimneys). Fleming’s command of classical architecture appears in the hand-made perfection of the façade’s Doric portico and the unusual column-like taper of the four pilasters on the back door surround. The first floor of the main block is fully paneled, featuring a majestic dining room with Tudor-Jacobean-style oak wainscoting. French doors on the rear of the house open to an English garden landscape complementing the mansion’s early 20th-century design within a gentleman farmer’s estate. Evolving into the 1950s, the landscape includes round stone gateposts at the entrance, a swimming pool, stepped brick and gated boxwood walls, a parterre, and a submerged pump house within a stone ha-ha wall. The Wallachs renamed the estate in 1924, honoring their daughter Hope’s birth. Recognized for their work on Hopefield and other country estates, Fleming and Hanback gained a reputation as the team to hire for hunt-country estate enhancements in the Piedmont during the early-20th-century.