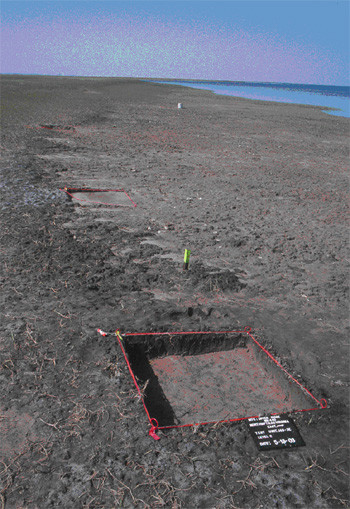 Located on Mockhorn Island, the Upper Ridge Site is an archaeological site along the Atlantic coast once occupied by Indians from 9500 B.C. to 900 A.D., the Paleo-Indian through Middle Woodland periods. The site extends 1,300 feet on a north-south axis by 200 feet east-west on the shoreline on a former ridge. Archaeological excavations indicate the Upper Ridge area experienced fluctuating shorelines and habitat during its thousands of years of human occupation, resulting in five different settlement patterns. For instance, during the Late Archaic and Early Woodland periods (2500 B.C.–A.D. 500), a rising sea altered the ecology in the Upper Ridge area so that people settled there into what archaeologists refer to as a “Rivershore focus” settlement pattern. Later, during the Middle Woodland era (500 B.C.–A.D. 900), when the forested ridge would have been part of a tidal marsh and coastal bay setting, people settled into an “Estuarine Wetland focus” pattern. The site also has yielded important information about inundation processes along Virginia’s Atlantic seashore, the formation of the Mockhorn Island area, human subsistence patterns and resource exploitation, and data about potential long-distant trade among peoples of the periods.