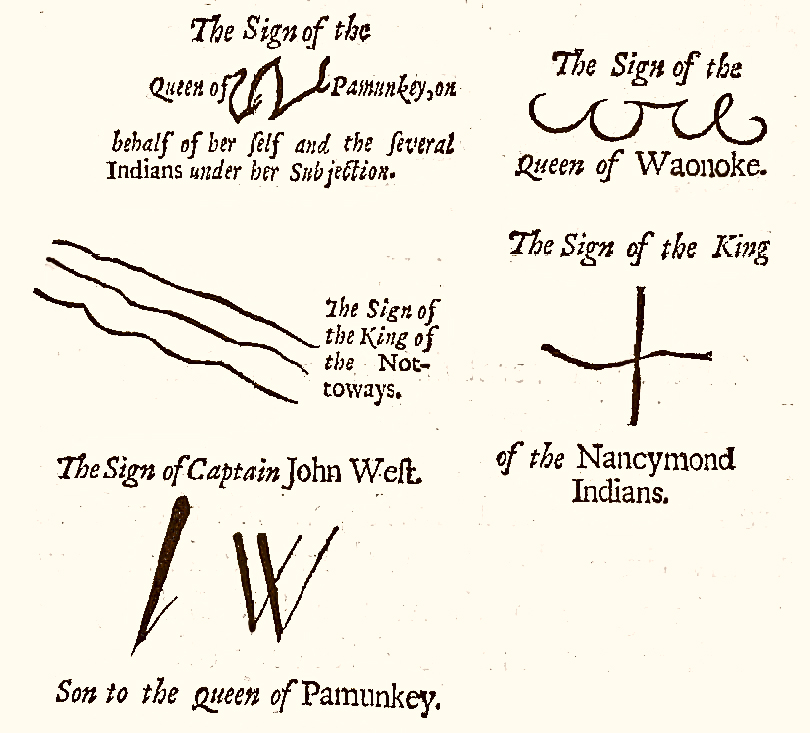 This Multiple Property Documentation (MPD) Form for the Nottoway will facilitate the listing in the registers of future nominations of Nottoway-affiliated sites. The Nottoway MPD recognizes the Nottoway as indigenous to the interior coastal plain of Virginia and North Carolina, and closely related to the region’s other Iroquoian-speakers, the Meherrin and Tuscarora. After intermittent contact with Europeans c. 1560-1650, a brisk trade emerged c. 1650-1675 between the Nottoway and the English colonists who settled in the eastern tidewater region. The Nottoway, along with the Pamunkey, were signatories of the 1677-1680 Articles of Peace (see image above) negotiated at the Camp of Middle Plantation, later established as the colonial capital of Williamsburg. Through the articles in the agreement, the Nottoway became “tributary” to the English king, a quasi-alliance that forced the Nottoway and other tribes to acknowledge the dominion of the Crown, but confirmed Indian governments and territories as dependent sovereigns. The Nottoway tributary status was again confirmed by treaty in 1714 at the conclusion of the Tuscarora War. As stipulated in these treaties, the Nottoway lands were surveyed and two reservations established around their Indian towns, in the landscape of what is today Southampton County. Later, the reservations were divided among the resident Nottoway from around 1830 to 1880, and “allotment” farms of extended Indian families were developed as private property homesteads.