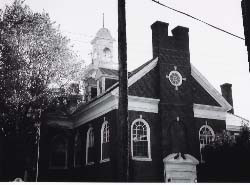 Located on the corner of an intersection in the old downtown, the Newport News Public Library was the first building constructed for use as a public library in Newport News. Built in 1929, and opened at the start of the Great Depression, the library was designed by noted Virginia architect Charles M. Robinson. The exterior of the building is red brick laid in Flemish bond and trimmed in white-painted wood. Rectangular and in the form of a modified crucifix, the building has a symmetrical façade, dormers, cupola, portico, cornices, broken pediments, and symmetrically placed chimneys, which are all hallmarks of its mix of Georgian Revival and Colonial Revival styles. It retains good historic integrity and still serves its original use, although it is now called the West Avenue Library. Among the first public establishments in the city to be integrated, the library is also significant for its association with the civil rights movement in Newport News.