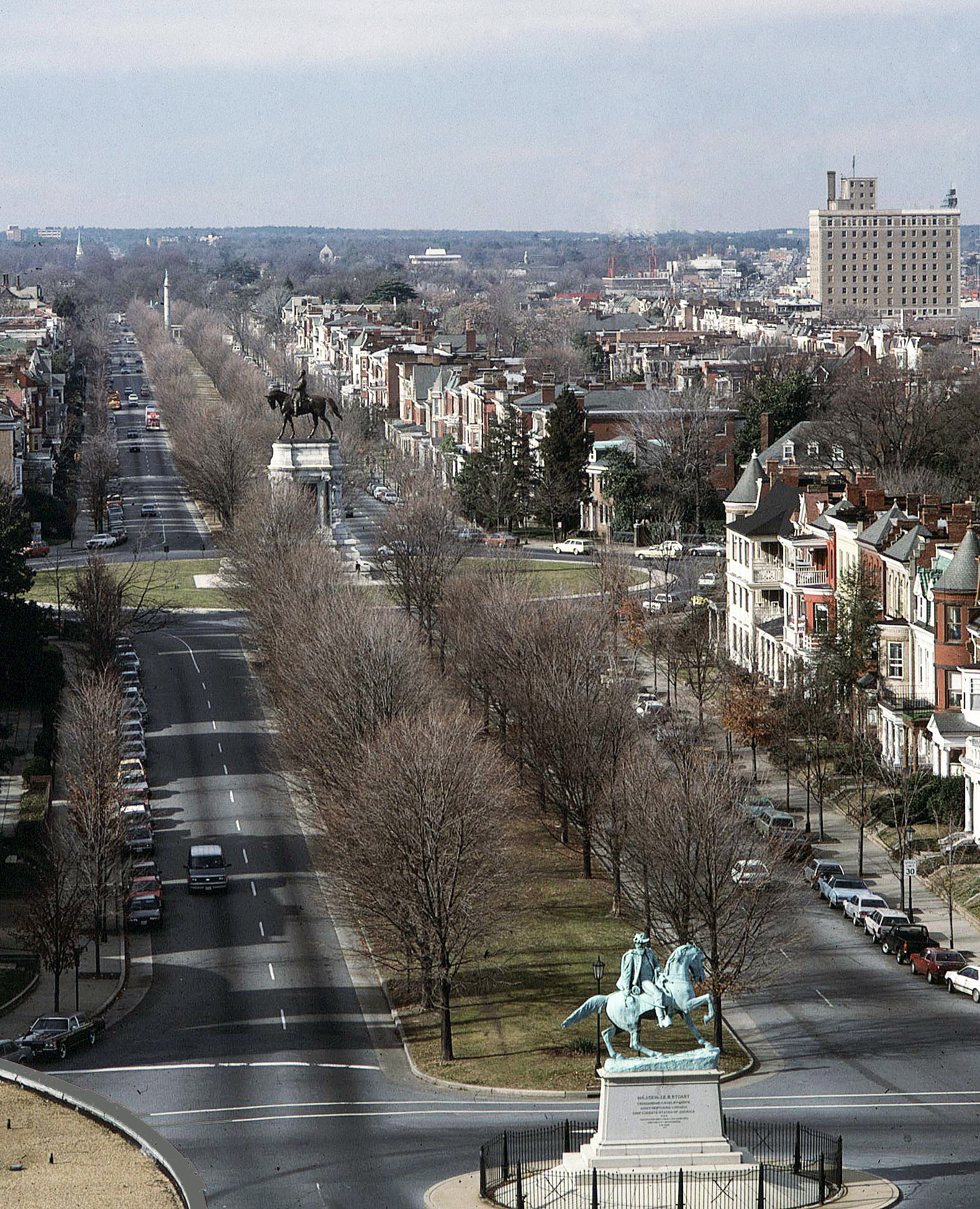 The Monument Avenue Historic District is a 14-block section of Monument Avenue and West Franklin Street. Proposed in 1887 to provide an appropriate setting for a major monument to Robert E. Lee, Monument Avenue was also intended to encourage residential development west of the city. The street is lined with stylish mansions, townhouses, churches, and apartment buildings, most of which were built between the turn of the century and circa 1930. Although executed in a rich mix of architectural styles, the district is characterized by the use of similar building materials, cornice and rooflines, setback and orientation. From 1904 until 1929, the development of the area as a residential neighborhood was matched by the raising of a series of monumental public sculptures commemorating Confederate leaders. One of America’s most splendid turn-of-the-century residential boulevards, Monument Avenue illustrates the best of Beaux Arts planning ideals and those of the City Beautiful movement. Its architects include John Russell Pope, William Lawrence Bottomley, W. Duncan Lee, and Noland and Baskervill.

The 1989 Monument Avenue Historic District Amendment included boundary adjustments which added rowhouses along West Grace Street and Park Avenue that represent the smaller and less architecturally distinguished homes of Richmond’s majority middle-class residents of the same period. All three streets provide a well preserved collection of early-twentieth-century residential and ecclesiastical architecture within a planned urban landscape that is unsurpassed in Virginia for its quality of design.
[VLR Listed 12/12/1989; NRHP Listed 1/17/1991]

In 1997, the Monument Avenue Historic District was designated as a National Historic Landmark for its significance in the areas of architecture, community planning and commemoration.
[NHL Listed 12/3/1997]

At the time that the Monument Avenue Historic District was originally listed in the Virginia Landmarks Register and the National Register of Historic Places in 1969, the district’s period of significance was broadly defined as “19th century” and “20th century.”  When the Monument Avenue Historic District was designated a National Historic Landmark in 1997, specific start and end dates for the NHL designation were selected, 1890-1940, beginning with erection of the Lee Monument and ending with construction of the last house on the avenue built before 1947. A 2019 amendment to the original nomination clarified the period of significance in the Virginia and National registers for the Monument Avenue Historic District as ranging from 1890 to 1940.  The 2019 additional documentation is attached to the original 1969 nomination.
[NRHP Approved: 8/5/2019]

In 2020, Monument Avenue was the scene of numerous public protests that were broadcast nationwide. All of the Confederate monuments were altered and portions of the Davis and Maury monuments were removed, as well as the figures of Jackson and Stuart.