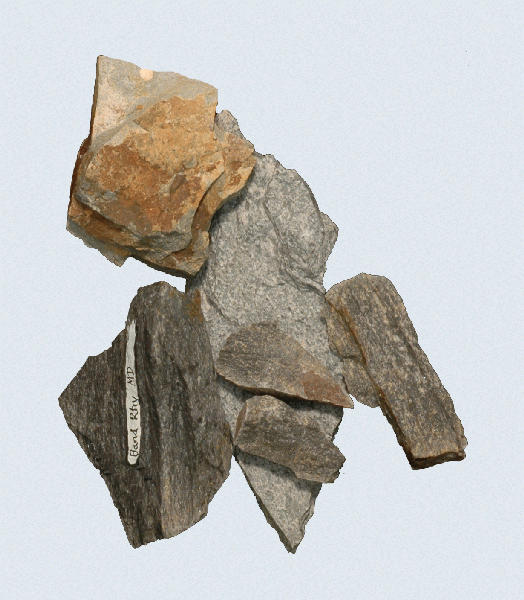 Collection Location:
All of the rhyolites described below come from the Catoctin Formation. The samples were collected on Catoctin Mountain, Frederick County, Maryland, except for the red porphyritic metarhyolite that was collected on South Mountain.

Description
A number of rhyolites are included in this discussion:
1) porphyritic metarhyolite: a dark blue-gray to black very fine-grained groundmass with rectilinear plagioclase feldspar phenocrysts. The groundmass can have a chert-like texture on the best material and weathers to a light bluish-gray to greenish-gray surface; the phenocrysts weather to white.
2) aphanitic metarhyolite: a very dark gray to black fine-grained material lacking banding or phenocrysts. It is homogenous with few internal flaws. Texture ranges from chert-like to slightly grainy and it weathers to a light gray patina that lacks any indication of flow banding.
3) banded metarhyolite: a dark blue-gray to black groundmass with fine, closely spaced bands of lighter minerals. Banding may be difficult to detect on fresh breaks but is obvious on patinated pieces. Feldspar phenocrysts may be present. Banding may include: a) a light gray to blue-gray groundmass with widely spaced yellowish to orangish bands, and b) a white to light gray to blue-gray groundmass with narrow, closely-spaced blue-gray to dark gray bands. On the latter variety, the exposed surface between bands has an almost oolitic appearance. The visibility and appearance of banding is often dependant on the direction in which the stone is broken.
4) red porphyritic metarhyolite: a medium to light gray, pink, or purple fine-grained groundmass with prominent white, rectangular, plagioclase feldspar phenocrysts. Some surfaces may have a phyllitic texture and sheen.