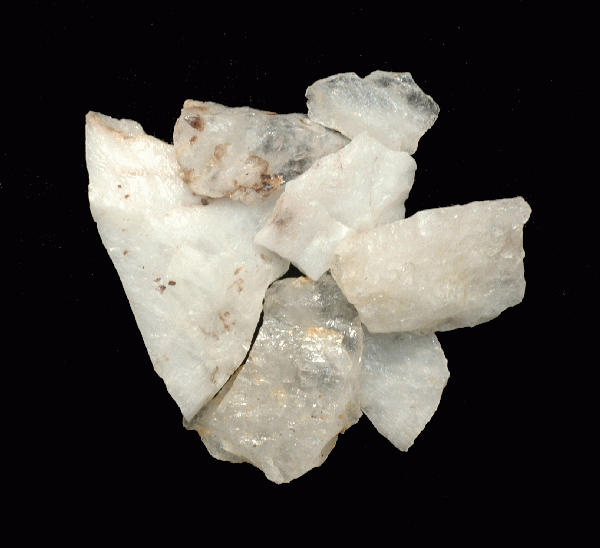 Collection Location:
Madison County, Virginia, but can be found in any Piedmont county in Virginia.

Description
Silica dioxide deposits commonly found as transparent vitreous veins, or thin, lateral outcrops at the ground surface. Samples from the same vein can vary in color from clear to cloudy to milky white, as well as rose, blue, and smoky. Color is dependent on fluid inclusions cased inside the crystalline structure of the rock at the time of its origin. Its fracture pattern can be conchoidal or splintery depending on the purity of the deposit. Quartz often forms visible hexagonal crystals.

Distribution
Associated with igneous rocks, quartz is the most abundant mineral on earth. Highly variable in quality and occurrence, it outcrops in the igneous formations of the Virginia Blue Ridge and Piedmont, often breaking into blocky segments. It is also found, probably in solution replacement form, in the sedimentary formations of the Ridge and Valley.

Cultural Implications
Given its ubiquitous distribution, highly variable quality, and the difficulty of analysis associated with quartz artifacts, the importance of quartz to Native peoples has long been underestimated by archaeologists. Since most sources of quartz break into small blocks along fracture lines, most quartz artifacts, whether made from quarry blocks or small cobbles, tend to be small.