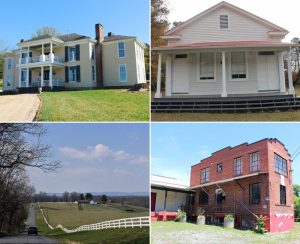 —New listings are in the counties of Henrico, Gloucester, Loudoun, and Wythe; the Town of Luray; and the cities of Richmond, Petersburg, Winchester, and Covington—

Nine historic places were listed on the Virginia Landmarks Register today, including a recreational services facility in eastern Virginia for African American soldiers during military segregation in the 1940s, one of Shenandoah Valley’s earliest apple processing and storage facilities, and the sprawling farm of one of Southwest Virginia’s most prominent political figures and industrialists.

The commonwealth’s Board of Historic Resources approved the Virginia Landmarks Register (VLR) listings during its quarterly public meeting today. The VLR is the commonwealth’s official list of places of historic, architectural, archaeological, and cultural significance.

Located in the City of Petersburg, the Byrne Street USO Club offered recreational services and entertainment programs for African American troops during World War II. The clubhouse remained in use as a recreational and community center for the city’s African Americans after the war and into the 2010s.

The Byrne Street USO Club was constructed in 1942 as a United Service Organization (USO) facility. President Franklin D. Roosevelt created the USO on February 4, 1941, to maintain morale among soldiers shortly before the country entered World War II. The U.S. military provided supplies and labor for the construction of USO buildings. Until the end of the war, the Byrne Street USO Club functioned as a space for Black servicemen to socialize safely and for the troops and their families to receive aid. The clubhouse shared a variety of programs with Black servicemen and civilians in the City of Petersburg, from music recitals and scholarly presentations to radio broadcasts and sports activities.

In the City of Winchester, the C. L. Robinson Ice and Cold Storage plant holds a significant place in the history of the local apple industry in the Shenandoah Valley, a region that has been recognized as an ideal environment for apple cultivation since the colonial period. By the early 20th century, a combination of capital investment and Winchester’s role as a regional rail hub spurred the rapid growth of the Valley’s apple industry.

In 1902, Charles L. Robinson, an ice and coal dealer who relocated to Winchester from West Virginia, purchased the plant and became one of the city’s leading industrialists and civic figures. The growth of the C. L. Robinson Ice and Cold Storage Corporation paralleled the rise of the apple industry in Virginia, and by the mid-20th century, Winchester was widely recognized as the apple capital of the eastern U.S. The closing of the plant in 1997 ended an era in the city’s industrial past.

In Wythe County, the 19th-century Fulton Farm was home to Andrew Steele Fulton, a prominent attorney, political leader, and industrialist of Southwest Virginia, and his family. Located in the southern part of the county, the property overlooks the New River and the New River Trail to the north, and features the Fultons’ two-story Greek Revival residence. Farm buildings surrounding the house include a large timber-framed barn with an integral wagon drive-through, a corn crib and granary likely dating to the 1850s-1870s, and a ca. 1920 Dickelman corn crib of steel construction.

Fulton served as a representative in the Virginia General Assembly (1840-41, 1844-45) and was elected to the U.S. House of Representatives as a Whig in 1846. In 1852 Fulton and his wife, Sarah Kincannon Fulton, purchased a large parcel near the lead mining community of Austinville, where they erected the farmhouse. An important figure in the area’s industrial development, Fulton operated a leadworks facility adjacent to the property that yielded $9,000 worth of lead products in 1860. In that same year, Fulton’s farm produced large crops of corn and wheat. Fulton sold the farm in 1875, and a succession of lead mining companies owned the property throughout the early 20th century.

The new VLR listings also highlight the impact of commerce on the commonwealth’s historic districts and towns:

The Board of Historic Resources approved two other VLR listings in its March quarterly meeting: