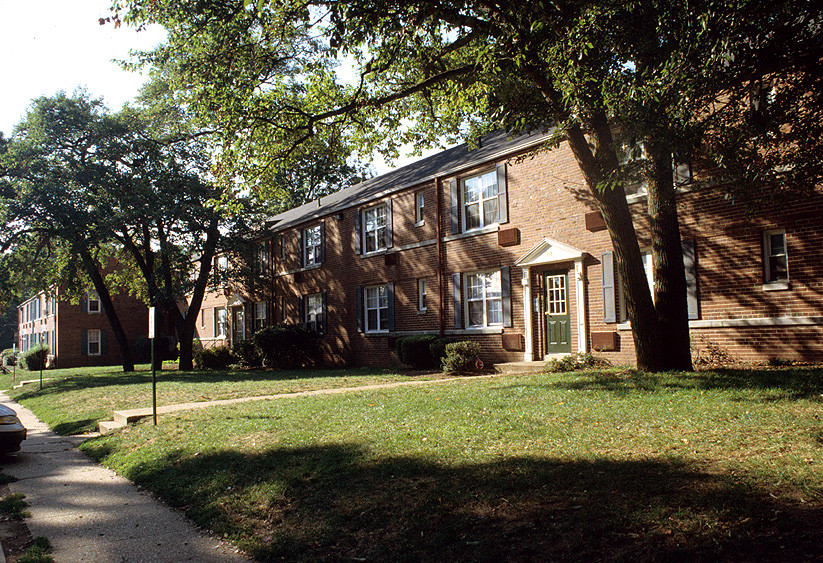 As a community, the Buckingham Historic District is closely associated with the development of Arlington from a rural area to an independent suburban Northern Virginia county. Built between 1937 and 1938 in the Colonial Revival style, the first phase of Buckingham is historically significant as a well-preserved example of the planned garden-style residential communities that became popular during the suburbanization of many metropolitan areas during the first decades of the twentieth century. With its low-density buildings, landscaped courtyards and streetscapes, and accessibility to the nation’s capital, the community became a model for other planned residential communities for white-collar, middle-class families. The success of the first 52 buildings, which comprised the first phase of the community development, led to the construction of nearly 2,000 units by the end of Buckingham’s construction in 1950. The units were based on architect Henry Wright’s final 1930s site plan. In the mid-1930s, the Committee for Economic and Social Progress, a private group consisting of 16 national business leaders including Allie Freed, sponsored the Buckingham project. The Committee for Economic and Social Progress formulated the concept of linking private financial sources with home building companies to foster the creation of better housing, i.e. higher quality, lower cost housing, for the majority of American families. During the same period Allie Freed was also the president of Paramount Communities Inc., which became the home building company that constructed the Buckingham project.

In 2003, the nomination was amended and the inventory of 52 buildings originally constructed in the 1930s was expanded to include Arlington Oaks and the Gates of Arlington (now known as the Gates of Ballston).
[VLR Listed 12/3/2003; NRHP Listed 2/11/2004]

With the 2009 Boundary Increase inclusion of the sixteen buildings collectively known as Buckingham Village 3, all six phases of the garden-apartment complex designed by Henry Wright, Albert Lueders, and Allan F. Kamstra between 1937 and 1953 were formally incorporated into the Buckingham Historic District.
[VLR Listed 12/17/2009; NRHP Listed 3/23/2010]