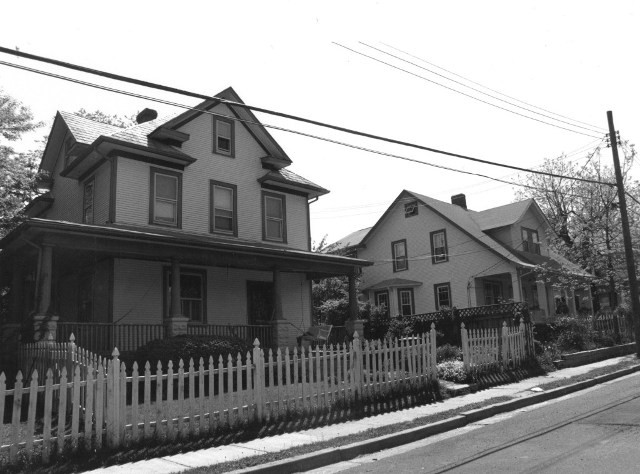 Arlington County’s Cherrydale Historic District is a significant residential suburb of Washington, D.C., dating from the first half of the 20th century. The district is made up of 828 single-family dwellings, 26 multiple dwellings, three churches and a church school, 22 commercial buildings, two service stations, a fire station, and a meeting hall. The first areas of Cherrydale to be developed were located along what are now Lee Highway and North Quincy Street during the second half of the 19th century on property owned by the Schutt family. The domestic buildings in Cherrydale range from the 1880s to infill housing of the turn of the 21st century, with most dwellings constructed in the second quarter of the 20th century. Most residential buildings are constructed of wood frame, although a number of masonry structures exist. The proximity of the Cherrydale Cement Block Company to the neighborhood probably accounts for the many poured and block concrete foundations and even structural systems of many of the houses in the area. Architectural styles presented in Cherrydale are suburban in scale and ornamentation, illustrating modest examples of the Queen Anne, Colonial Revival, Italianate, Gothic Revival, Art Deco, Craftsman, Tudor Revival, Classical Revival, Spanish Revival, and Moderne styles.