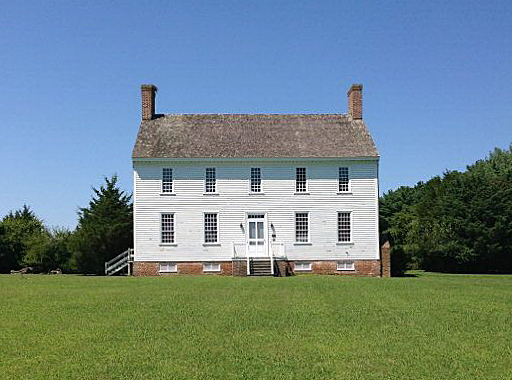 Completed in the third quarter of the 18th century, the Shepherd’s Plain dwelling is a two-story Georgian mansion built for Edward Ker, an Accomack County planter and politician. Its architectural interest is heightened by the rare rusticated quoins employed on the brick ends and in the gables. The Gibbs-type rusticated surround on an end window is Virginia’s only example of this type of architectural decoration in brick. Also noteworthy is the large quantity of original interior woodwork, especially the parlor paneling with its chimneypiece framed by pilasters set on pedestals. The Georgian stair is exceptional as well. These architectural details illustrate the proficiency of Eastern Shore craftsmen in executing sophisticated designs based on designs in 18th-century English pattern books. The handsome architectural character has been brought out through a long-term restoration by its owners late in the 20th century.