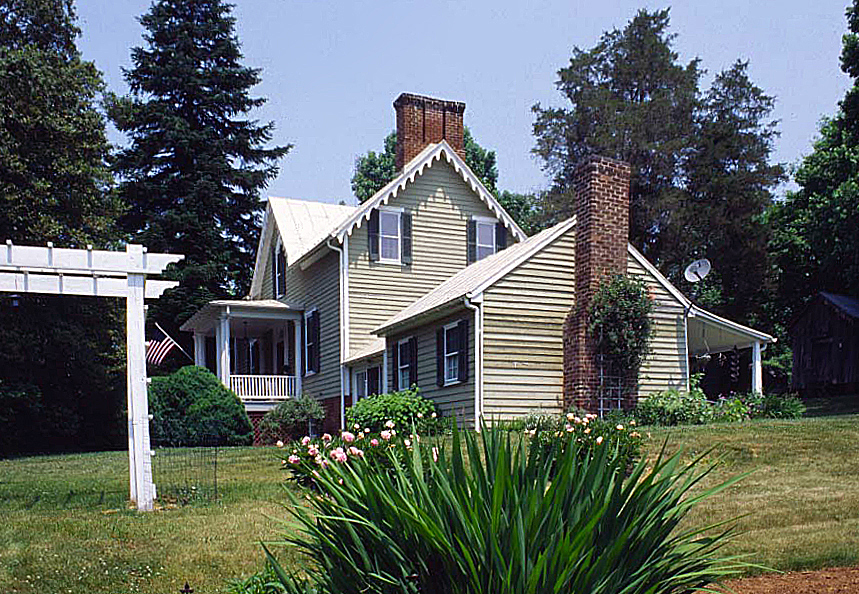 The main house at Mechum River Farm is an excellent example of an early-19th-century simple hall-parlor, or two-room dwelling, stylistically updated and enlarged to a Gothic Revival house in the mid-19th-century. The original section was probably built about 1820 by an unknown owner. In 1850 John Burch, a professional brick mason, employed a central cross-gabled roof and pointed-arch windows to remodel it in the then-popular Gothic Revival style. The house provides evidence of the pervasiveness of architectural pattern books and how they were used to stylistically update simpler dwellings. Though there is no definitive evidence that Burch had access to pattern books such as those by architect Alexander Jackson Downing, the house represents many of the simple and efficient theories presented in his books. The picturesque style was thought to blend particularly well with small, rural houses like Mechum River Farm. The house was altered further in 1920, when a single-story addition was built on the rear. Various dependencies exist, including an 1820 summer kitchen and smokehouse, and an 1850 barn, as well as other agricultural outbuildings and the Burch family cemetery.