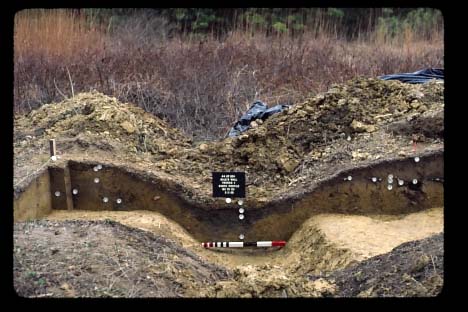 The Dale’s Pale Archaeological District is a collection of four county-owned archaeological sites, constituting a vitally important area in our nation’s early history. The district’s name alludes to one of those sites, the location of a defensive palisade built by Sir Thomas Dale in 1613 around the original settlement at Bermuda Hundred, which he founded. This berm-and-ditch feature is two miles in length, running between the high banks overlooking the James and Appomattox Rivers; it accords with Ralph Hamor’s 1614 account of the palisade, also called a pale. The pale was periodically reused during the colonial period as a boundary ditch, and is still used today as a property boundary in some areas. The other sites within the district include a Middle Woodland Period (500 BC– AD 200) settlement, and a late 17th- or early 18th-century house with its associated dump. Taken together, the district’s sites present an extraordinarily rich collection of material with the potential to provide information about defense, community organization, and subsistence in some of the earliest periods of Virginia’s history.