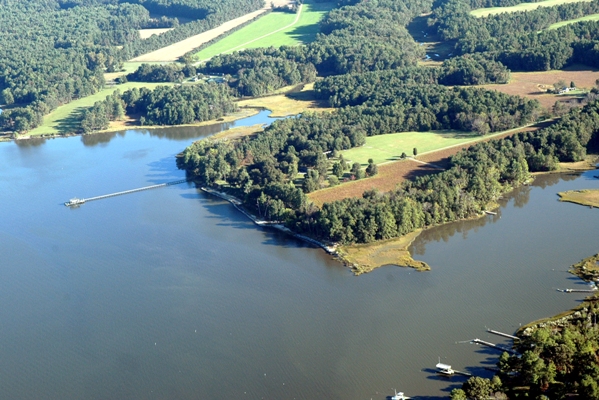 Werowocomoco, located along the York River’s Purtan Bay, is the only site in Virginia where the three legendary figures of paramount chief Powhatan, Captain John Smith, and Pocahontas crossed paths. Shown on John Smith’s famous 1612 “Map of Virginia,” Werowocomoco was the primary village and residence of Powhatan and the place where Smith was brought as a prisoner in 1607, when Powhatan first encountered him and where, according to Smith, Pocahontas saved his life. In 1609, seeking to gain distance from the English settlement of Jamestown, Powhatan abandoned Werowocomoco and moved further west. Thereafter the village largely disappeared from the historical record until the latter 20th century when scholars reexamined its location based on archaeology, narrative accounts of Jamestown settlers and their references to geographic features, and historic maps such as Smith’s. Following the leads of historians, cultural anthropologists, and archaeologists placing Werowocomoco at Purtan Bay, a comprehensive archaeological survey was conducted in 2002 that clearly confirmed the site’s identity as the village of Powhatan. Since 2003, archaeological excavations at the site have been conducted by the Werowocomoco Research Group, a partnership between the site’s property owners, the Department of Historic Resources, the College of William and Mary, and an advisory board of Virginia Indians. The Werowocomoco Research Group has documented the well-preserved remains of the former Indian village and capital of the Powhatan chiefdom.