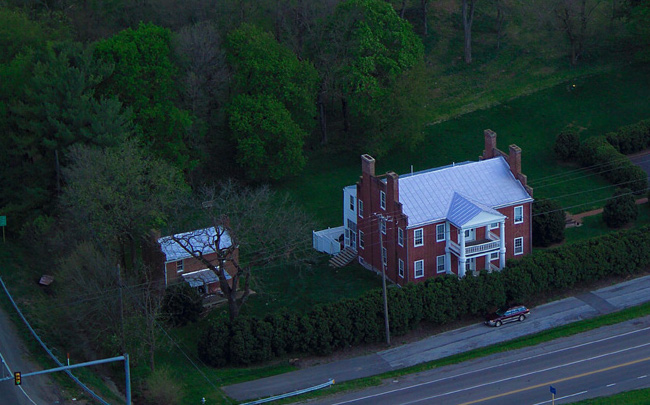 The sophisticated Greek Revival Jonathan Peale House, built in 1845, features a dominant front portico and fine brickwork. The property also includes an unusually refined brick slave quarters. While the high quality of the house and its dependencies indicate the relative wealth and standing enjoyed by the Peale family, the property’s history is also significant. In April 1862, during diversionary tactics designed to prevent Union forces of General Irvin McDowell from reinforcing those of General George McClellan’s during the siege of Richmond, Confederate General Stonewall Jackson made his headquarters at the Peale House, while his troops bivouacked in the family’s tannery field across from the house. This area of Rockingham County, near Harrisonburg, saw two major battles, Port Republic and Cross Keys, during the Civil War. With its front and rear porches offering good views in both directions, The Peale House, located near the southern end of Massanutten Mountain, proved ideal for use by Jackson. It survived the war with little damage and remains a well-preserved 19th-century building.