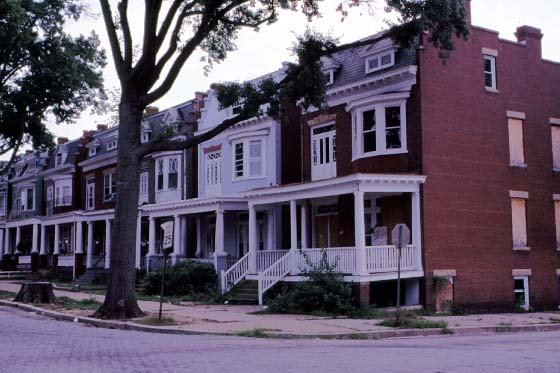 The Oakwood-Chimborazo Historic District is another example of early speculative residential development following the introduction of a trolley line; thus the district’s linear shape, encompassing three neighborhoods—Chimborazo, Oakwood, and Glenwood Park. Although Oakwood and Chimborazo have merged over the years, Glenwood Park still retains a distinctive character due in part to its park-like setting and curvilinear streets. The Oakwood-Chimborazo district contains a significant collection of late 19th- and early 20th-century brick and frame dwellings that display an eclectic architectural mix of Late Victorian, Queen Anne, and Colonial Revival styles, alongside Victorian cottages and a few bungalow-style houses. Schools, churches, and corner stores enhance the visual dynamic of the district, which also includes three contributing cemeteries and three parks, one previously VLR-listed school, and 1,606 buildings. The Civil War-related sites of Chimborazo Hospital and Oakwood Cemetery also are part of the district. Many of Richmond’s leading architects designed buildings here. For the most part the district reveals a high level of integrity and preservation. The significant growth of Richmond’s African American middle-class is evidenced in the district’s Evergreen Cemetery, established in 1891, and the transition of the area during the 1950s and 1960s into a largely black community.