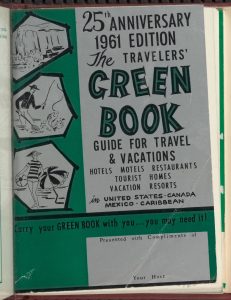 DHR State Archaeologist Elizabeth Moore explores the significance of the 1961 issue of the Green Book, a popular 20th-century travel guide for African Americans, and the historic Baldwin’s Pharmacy in Martinsville.

First published in 1936, the Green Book provided recommendations for lodging, dining, and automobile service for African American travelers. Initially published for vacationers in the New York metropolitan area, the Green Book’s demand reached a height so great that by 1937, the scope of its listings was expanded to cover the entire United States.

Against the backdrop of Jim Crow–era segregation in the U.S. South, the Green Book published a curated list of destinations—hotels, restaurants, beaches, and various businesses—across the country that welcomed African Americans. In turn, the book’s information helped Black travelers avoid the difficulties associated with racial inequality and prejudice on the road: “Just what you have been looking for!! Now we can travel without embarrassment” (Green 1948). In its 1961 Silver Edition, the Green Book expanded its coverage to include listings in Bermuda, Canada, the Caribbean, Mexico, and the West Indies. The book’s last edition was published in 1966.