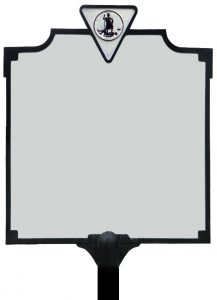 —Isaac Brandon, a 43-year old African American, was dragged from a jail cell and hanged by mob of about 75 masked men; this is Virginia’s first state historical marker that highlights a specific lynching—

—The marker text is reproduced below—

The public ceremony to dedicate the marker begins at 3 p.m., this Sunday, April 7, at the Historic Charles City Court House, 10780 Courthouse Road, in Charles City County. A reception will follow the dedication ceremony.

Speakers during the event will include state Senator Jennifer Leigh McClellan; Tish McDonald, the great-great-granddaughter of Isaac Brandon; and Julie V. Langan, director of the Virginia Department of Historic Resources.

Brandon Isaac was being held in the Charles City County jail on a charge of assaulting a white women, when a “mob of about 75 masked men dragged” him from a cell and “hanged him from a tree on [a] hillside on the night of 6 April 1892,” in the words of the marker.

Brandon, 43-years old at the time, was married and “the father of eight children,” the marker recalls. “No charges were filed in connection with Brandon’s murder,” the marker notes.

He was one of “approximately 100 people, the vast majority of them black men,” the marker reads, who “were killed in documented lynchings” in Virginia between 1877 and 1950. During that same time period more than 4,000 people were lynched throughout the United States.

The marker will stand along the Virginia Capital Trail near the historic courthouse. It was approved for manufacture and installation in September 2018 by the Virginia Board of Historic Resources, which is authorized to designate new historical markers.

The marker’s sponsors, the Charles City County branch of the NAACP and the Richard M. Bowman Center for Local History, have covered the costs of producing the marker.

Virginia’s historical highway marker program, which began in 1927 with the installation of the first historical markers along U.S. Route 1, is considered the oldest such program in the nation. Currently there are more than 2,600 official state markers, most maintained by the Virginia Department of Transportation, and by local partners in jurisdictions outside of VDOT’s authority.

A mob of about 75 masked men dragged Isaac Brandon from a cell in the old Charles City County jail and hanged him from a tree on this hillside on the night of 6 April 1892. Brandon, a 43-year-old black man, had been held in jail on a charge of assaulting a white woman. He was married and the father of eight children. No charges were filed in connection with Brandon’s murder. More than 4,000 lynchings took place in the United States between 1877 and 1950. In Virginia, approximately 100 people, the vast majority of them black men, were killed in documented lynchings. Lynch mobs terrorized African Americans and helped to maintain white supremacy.