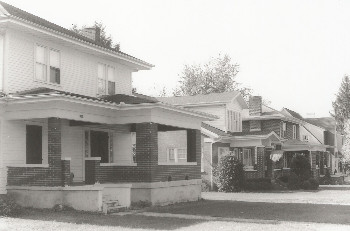 The Euclid Avenue Historic District, located north of Bristol’s historic downtown, arose in 1890 when developers believed the area’s growing iron industry would make Bristol “the Pittsburgh of the South.” Originally, Euclid Avenue was laid out as the primary business corridor for a “new” city of Bristol, to supersede the old one. Although that grand scheme failed, the Euclid area attracted many leading citizens as it merged with an expanding Bristol during the early 20th century; in particular, from 1920 to 1930, residents built numerous homes throughout the Euclid district, creating a wide variety of middle- and upper-class houses in popular architectural styles such as Queen Anne, Colonial Revival, Dutch Colonial Revival, Tudor Revival and Craftsman-Bungalow. By the end of World War II in 1945, the Euclid Avenue district’s development was largely complete. Today, the district retains a high degree of its early 20th-century character.