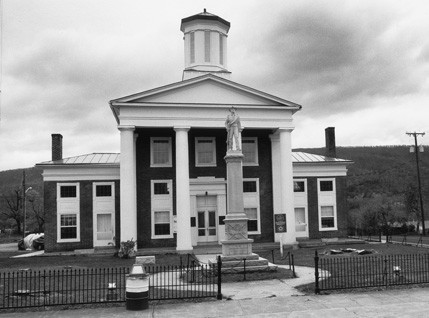 This secluded mountain community preserves one of the Commonwealth’s noted antebellum court complexes. The courthouse was built in 1851 when New Castle became the county seat. With its portico and tripartite scheme, the building was modeled after Botetourt County’s courthouse. Union troops passed through during the Civil War and are said to have left saber cuts on the courtroom balustrade. Adjacent is a country Greek Revival building containing the jail and sheriff’s residence. Across from the square is the antebellum Central Hotel with its two tiers of galleries, one of the period’s larger county seat taverns. These court-related structures attracted enterprise and became the nucleus of a commercial center and a residential area. The typical New Castle commercial building is a two-story frame store with a false-front parapet and large display windows.  The boundaries for this original New Castle Historic District were expanded in 1993.